MINNEAPOLIS, Minn. (October 29, 2020) – Don is recovering in the Twin Cities after a furnace explosion engulfed his body in flames and sent him to Hennepin Healthcare’s Burn Center for 6 weeks. For the last week, this 85-year-old burn survivor, would rush back to his apartment after his daily therapy appointments to watch crews navigate a 180-foot-tall crane at a construction site across the street. He is fascinated with the construction, and the crane is a welcome distraction after all that he has been through.

Today a large banner that reads, “Get Well Soon, Don” sits on top of that giant crane at 615 S Eighth Street, Minneapolis, MN 55404. 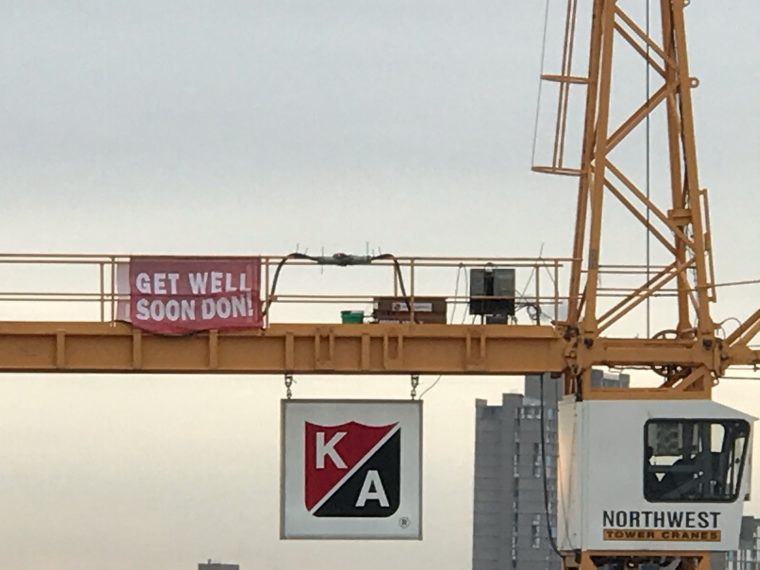 “We wanted to create a priceless memory for The Miracle Man who has overcome so many odds,” said Jake LaFerriere, Founder of Firefighters For Healing, a non-profit that provides free temporary housing for burn survivors just like Don so that they or their family are close to the hospital or outpatient clinic.

For background, Don’s accident occurred the morning of September 9th, when he headed out to his Cold Spring shop to get the furnace ready for winter, a task he has performed for the past 35 years. On this morning, however, something went terribly wrong and there was a large explosion.

His 80-year-old wife, Connie, heard the blast and ran outside to find Don in the shed, on fire with his hands in the air. She rolled him in an area rug to douse the flames and called 911.  The Cold Spring Fire Department arrived on scene, assisted by the Rockville Fire & Rescue, Cold Spring Police Department, Stearns County Sheriff’s Department and Mayo Ambulance. Don was rushed to Hennepin Healthcare’s Level 1 Burn & Trauma Center in Minneapolis. Considering the gravity of his injuries and age, he was not expected to survive. Don spent weeks in the Burn Center ICU.

During Don’s hospitalization, his wife and a family member stayed free of charge in the Firefighters for Healing apartment near Hennepin Healthcare.  The apartment is made possible through a partnership between Kraus-Anderson Companies and Firefighters For Healing and has served many families since opening in 2018.

Don endured horrific pain and several surgeries. He remained on a ventilator with countless lines and tubes connected to his body. He fought hard and earned his nickname The Miracle Man by making remarkable progress given his circumstances.

When Don was finally discharged, he joined Connie at the HQ apartment. He is staying in town because he is accessing outpatient services at the Knapp Rehabilitation Center right across the street for his physical therapy, speech therapy, occupational therapy and general wound care.

When Don was not at his daily appointments, he watched the hustle and bustle of the city from the large window in their unit.  He was particularly enthralled with the Kraus-Anderson crew building The Larking … and especially with the crane, watching the operator’s every move, every day.

As Don prepared to return to Cold Spring, Kraus-Anderson volunteered to create the huge get-well sign and place it on top of the crane.

“KA went out of its way to get this done,” said LaFerriere.  “Watching the crane operator and construction process was a pleasant distraction for Don, and the tall get-well gesture helped to lift his spirits. I imagine it will also lift the spirits of the burn center team members who cared for him.”

About Firefighters For Healing