The latest episode of KA’s Build Me Up podcast discusses a critically important topic that affects every industry, but is hitting the construction industry particularly hard. The silent epidemic, as it has been referred to, is the issue of mental illness, especially depression.

The numbers are jarring. According to the CDC, suicide rates for people in the construction industry are twice as high as the United States national average. 1 in 5 construction workers experience mental health challenges, but it is often a silent battle. What factors contribute to mental illness, and what can we do as an industry to end the stigma that can prevent people from recognizing problems and seeking effective help?

To discuss the effects of mental health on the construction industry, we talked to Bob Swanson, retired president of Swanson & Youngdale, a Minnesota-based paint and drywall contractor. Bob is a suicide prevention advocate for the National Alliance of Mental Illness (NAMI). He was named the Minnesota chapter’s 2019 Volunteer of the Year for the countless hours he has dedicated to educating and speaking up about suicide prevention across the country. We are also grateful to Brendan Ward, a Construction Engineer at Kraus-Anderson, for sharing his personal  industry perspective and his own journey.

“When I visited jobsites earlier in my career, I had one thing on my mind: Are we on schedule? … But then I realized, for a few minutes I can get to know my people and see what’s really going on … And boy, did that change things.”

Bob spent over 45 years in the construction industry – where he admittedly didn’t put much focus on the mental health of his colleagues. The stigma of mental health can make it difficult to address, particularly in an industry that emphasizes hard work and long hours. But everything changed for Bob when his son Michael died by suicide in 2009 at the age of 33.  Like many suicide loss survivors, he dealt with a lot of guilt. As he grieved, he decided that he wanted to channel his pain to speak out and help others. Bob has been speaking across the country to construction companies and labor unions on mental health and suicide prevention.

What factors contribute to the high suicide and mental illness rate in the construction industry? 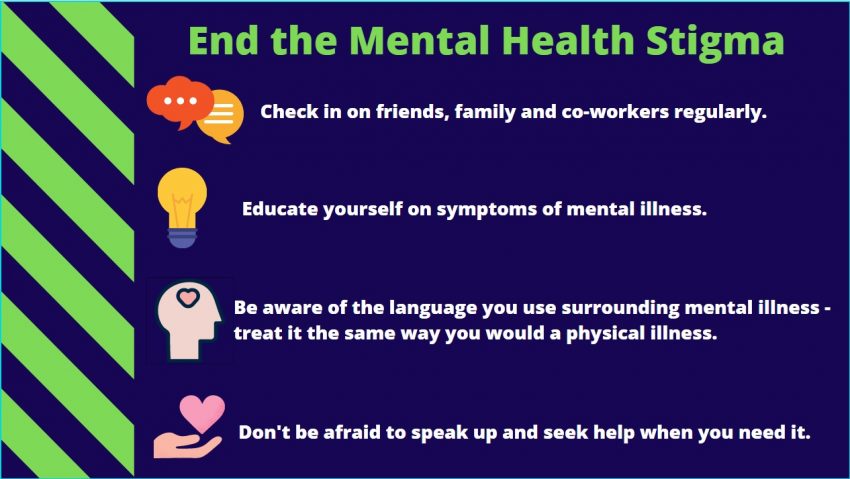 It takes a lot of courage to speak up and discuss mental illness. Ending the stigma is not something that can happen overnight and it takes buy-in from everyone. Bob and Brendan both agree that treating mental illness in the same way as physical illness is a place to start. Checking in with friends, family and co-workers beyond the surface level may feel intimidating, but it could save lives.

For an in-depth conversation on mental health in construction, steps toward ending the stigma, and considerations on how the industry can move forward, tune in to the latest episode of Build Me Up. You can subscribe to Build Me Up wherever you listen to podcasts.