Build Me Up: Sam Ebute and the Power of Resilience

Sam Ebute is the director of the MN Trades Academy, a paid internship experience for high schoolers to expose them to career pathways in construction. His own journey to the industry did not follow a traditional path. In this special episode of the Build Me Up podcast, guest host and KA’s Director of Inclusion and Diversity Laurie Trousil sat down with Sam to learn more about his early life in Nigeria, the culture shock of moving to Menomonie, Wisconsin, and the events in his life that led him to mentoring Twin Cities youth. His story of courage, resilience and  compassion built from adversity, is a timely and inspiring message for all of us.

The Journey from Nigeria to Wisconsin

Sam Ebute was born in Nigeria. As a polygamist family, he had 21 brothers and sisters growing up, and it was an important part of their culture to have successful children that could give back to their family. When he was a young teenager, Sam’s father told him that he would be traveling to the United States with his aunt and uncle, who were moving to Menomonie, Wisconsin, so his uncle could work on his PhD at the University of Wisconsin – Stout. The thought of traveling somewhere new was exciting for Sam, but he had no idea what to expect.

“Talk about standing out in the crowd … It’s not scary or bad to be different, but that’s when I noticed my difference a lot more.”

It was a difficult transition, and enrolling in public school was a complete culture shock for Sam. He quickly began noticing the differences between himself and his peers, from his clothing to the way he talked. Moving to a small, agricultural community, it was difficult for him to feel like he fit in, and simple things like finding a job were extremely challenging. He didn’t feel like he was truly part of his extended family that he was now living with, and there was a part of him that longed to return home to Nigeria. It hurt him that he couldn’t communicate with his family back home. It took time, but Sam began finding friendship and community in sports. After a few years, he started to feel like he was acclimating to the culture.

“Knowing that there is a valuable career option for a lot of students who might graduate at 18 … How can we get them into a livable wage job right out of high school, if they are determined to do it?”

But one day, Sam’s uncle approached him with some shocking news. His family was going to be returning home to Nigeria, but Sam would not be joining them. He was told to stay in the U.S., finish high school, and get a college degree. They would send him money for school, but Sam was left to work through how to pay for rent, where to live, and what to do from here. The next few years, Sam felt abandoned, lost and alone. He had close friends that helped him along the way, but he was still struggling to finish school, find a purposeful career and make ends meet. Sam’s own struggles while growing up, eventually led him down a career path as a youth counselor. He understood what it felt like to grow up in dysfunction, and to feel abandoned. He pushed his students to earn their high school diploma, no matter how difficult the path is. But he understood that the traditional college path is not for everyone. 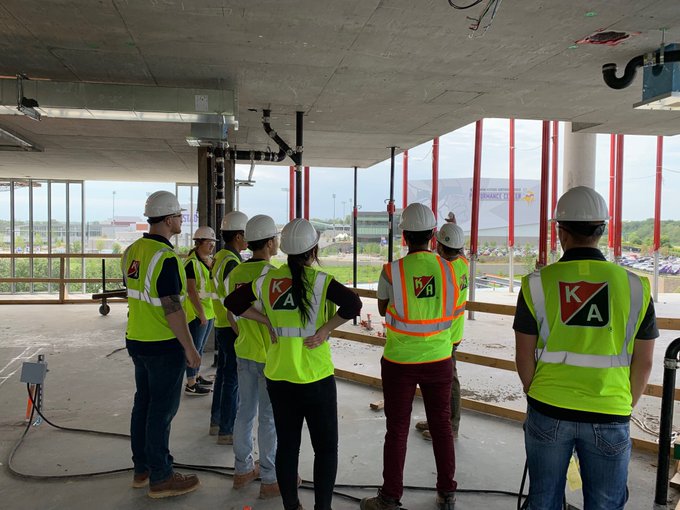 Sam’s involvement led him to MN Trades Academy. Now serving as the director, Sam uses his past experiences and passion to provide opportunities for high schoolers to gain valuable skills that will set them up for a successful career in the construction trades. The summer internship is hands-on, and and provides two tracks based on experience level. Track I is designed as an introduction to the different trades and allows the intern to explore what may interest them. Track II is more advanced, and prepares the interns to select a specific construction career path.

“It truly is everybody rolling up their sleeves to make sure that we’re succeeding as an industry, and the kids are succeeding as well. They’re getting into something that they’re passionate about and they can have a great career going forward.

MN Trades Academy partners with local public schools and construction companies to recruit students. Having partnerships gives the students an immersive experience, with jobsite tours, mock interviews, networking events along with problem solving and technical trade skill development.  Last summer, nearly 500 students across the Twin Cities applied for the program. They must also go through an interview process, and MN Trades Academy had around 70 students from 36 Minnesota high schools go through its program. One of the organization’s goals is to have every community represented. Sam’s successful growth of MN Trades Academy is a testament to his strong character. Rather than let his early hardships hold him back, Sam has pushed onward and uses his influence to help others find their success.

Tune in to the latest episode of the Build Me Up podcast to hear Sam’s story in his own words.