How KA and Industry Partners Team Up to Support Veterans

“Thank you for your service” is an expression often used when meeting and speaking to American military and veterans of the military, especially at this time of year. KA is proud to count many veterans as well as active military Guard and Reserve personnel among our ranks. Moreover, we work with our colleagues to provide a wide array of needed services to veterans in the interest of giving back to those who have given so much. Here’s a look at two of our business partners who show their commitment to veterans, all year long.

The City of Hugo joined the Minnesota National Guard’s Beyond the Yellow Ribbon Network (YRN) in 2010, the second city in Minnesota to join the program. Since then, the Hugo YRN has earned a reputation of enduring, dependable, and meaningful support for our military members and their families, providing ongoing, seasonal and signature events, says Chuck Haas, Director of the Hugo YRN.

Talk about the ways YRN reaches out to veterans.

Ongoing programs include monthly responses to requests from military service providers and military members themselves for assistance such as home repairs, car repairs, snow plowing, lawn mowing, moving, transportation and help with payments of household and medical expenses. Not a month goes by without the Hugo YRN responding to a request for assistance.

Seasonal programs include: a Secret Santa program connecting YRN volunteers with military families in need of a little extra help with Christmas gifts. The program helps between 15-20 families every year; providing volunteers and funding for military unit events such as military unit pre-deployment gatherings and holiday parties; support for Gold Star Weekend at Camp Ripley; financial support for the National Guard Youth Camp; hosting a Youth Hunt every year at Wild Wings.

What motivates you to support this effort?

CHUCK HAAS: Supporting the military has always been in the back of my mind because my father and several uncles served in WWII. A new urgency about the need for support was brought to my attention at a Washington County Local Government Officials dinner in 2006 (I have been on the Hugo City Council since 1998) when Minnesota National Guard Chaplain John Morris spoke to the assembly about the new obstacle facing our Minnesota National Guard; they were being tasked to deploy overseas to supplant regular military units and there was a critical need to support them and their families through this overseas deployment cycle. When the concept of City Yellow Ribbon Networks was presented, we were one of the first to join in.

How is the Hugo chapter distinct?

CHUCK HAAS: Sadly, some city YRN have started, faltered, and disappeared. We are fortunate to have a robust volunteer network that has gained a reputation for enduring, dependable, meaningful support. Hugo has been recognized for that support in a variety of ways. Hugo was recognized as the Nation’s Leading Mid-Sized City supporting our military by the Washington DC organization, Homeward Bound. Hugo has been recognized by the Department of Defense with its Seven Seals Award for exemplary service in support of military members and their families. Hugo as received the Minnesota National Guard’s Superior Volunteer Service Award, the highest award that they can bestow upon on civilian organization for its support of our Minnesota National Guard.

How has Kraus-Anderson helped with these efforts? 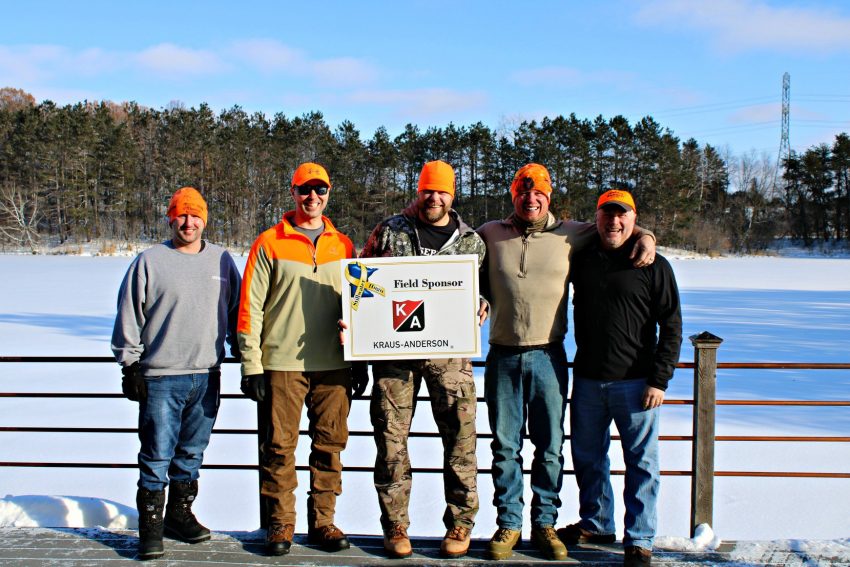 Hugo has partnered with KA and Jason Rentmeester for more years than I can count. We have hosted a Welcome Home the Troops Pheasant Hunt for every Minnesota National Guard unit returning from overseas deployment since 2010. There have been 23 such hunts and KA has been a sponsor for most, if not all of them. There have been times when our network has needed volunteers to move a military family and Jason and KA have responded with trucks and volunteers. Hugo considers KA a dependable partner in supporting our military members and their families.

Bald Eagle Erectors has worked with Kraus-Anderson on projects spanning 25 years. In addition to a successful track record of work, KA and Bald Eagle also share a dedication to serving communities in need, including the veterans community.

How has your military service helped you in your life and career?

DAVE BICE, OWNER, BALD EAGLE ERECTORS: The Marine Corps changed my life in many ways. It helped me grow up as a young man and taught me to never give up. This lesson helped me stay in business when things look hopeless. I never gave up and kept going.

Talk about your heritage as an iron worker and Native American.

DAVE BICE: I do come from a long line of Ironworkers, my grandfather and his three brothers came down from White Earth Reservation and all became Union Ironworkers, as did my uncles, cousins and brothers. The ironworker’s union has always accepted American Indians and we have thrived in the ironworking trade. That is something that makes me very proud of my heritage and service in the Marine Corps.

What motivates you to give back to the community? How does KA fit in with those activities?

Leanne Stevens, our Controller and Vice President, is on the Tee it up for the Troops (TIUFTT) Board of Directors and we support this organization every year. TIUFTT helps veterans and their families in numerous ways on a local and national level.

In November of 2016 we partnered with Local 512, Lejeune Steel, Vic’s Crane and a couple other Ironworking companies to build two 70’ long steel walk bridges at the Veterans Camp on the Marine on the St Croix, attached is a picture of all the Ironworker volunteers.

We have a great relationship with Kraus-Anderson, and we have been working with you since I started in Business. I have learned a lot from working with KA over the years and look forward to our continued working relationship.

What else do you want to share about your relationship with veterans?

I am starting to transition Bald Eagle to new ownership. Mike Bice with be the majority owner. He is my nephew and a Navy veteran. The other owners consist of Leanne Stevens, Robert Bice and Tori Blaisdell. Tori is a Sargent in the MN National Guard, MP Unit that is currently deployed.

For more info on how you can help:

Tee it Up for the Troops: https://teeitupforthetroops.org/