Kraus-Anderson Construction Company’s Craig Francois retires as Vice President and Co-Director of Operations this month, wrapping up an eventful 40-year career at KA. Craig recently shared some of his insights about his KA career.

Was KA your first employer right out of college?

CRAIG FRANCOIS, VICE PRESIDENT, CO-DIRECTOR OF OPERATIONS, KA TWIN CITIES OFFICE:  I started working on residential and farm building construction when I was a junior in high school and throughout college. Upon graduation from Iowa State University in May 1979, I was fortunate to be hired by Kraus-Anderson.

What did you know about KA when you landed here?

CRAIG FRANCOIS: Since the first time I set foot in Minnesota was when I interviewed with KA, I was not familiar with KA’s legacy and Lloyd’s reputation in the Twin Cities, so it was good fortune that brought me here. I guess the two reasons why I choose to work at KA was they were located close to NE Iowa,  and I believed KA would have opportunities to work on great construction projects both big and small.

What were your initial duties?

CRAIG FRANCOIS: Coming out of college I was leaning towards the superintendent role and was assigned to the 100 Washington Square project (after five weeks in estimating with Mark Coudron) to be a gofer for the superintendents. I primarily worked with our concrete crew.

We were the first company west of Chicago to use super plasticizer in our concrete. I did the concrete tests and mixed the plasticizer into the concrete on the site. As the concrete work finished, I was assigned as the project engineer and along with Bill Jarvis completed the project through closeout. I enjoyed the challenge of high rise construction and it was the most structurally unique project that I have worked on, with the Veradale truss exterior skin and the 15 foot high post-tensioned girders.

Who are some of the memorable people from your early days/years at KA? Any stories to share?

CRAIG FRANCOIS: Oh my … where to start as there are so many! You know the field guys were characters that worked hard and played harder. From the early years, it was an honor to work with Smiley (Alan Fortman), Everett Olson, Peppy, Wally Brenner, Clarence Stockton, Syd Dahlin, Ben Novak Larry Peters, Harold Beckman… they taught me so much. As for stories…Just don’t let the mongoose get you!!

Right after the completion of 100 Washington Square, you went on the road for KA. Talk about that.

CRAIG FRANCOIS:  I was sent out to Dallas and helped get the Lincoln Centre, a 19-story, 650,000 SF office project out of the ground. We had a large onsite team with Al Gerhardt working on a hotel on the same site as the office building I was working on.  We were a KA family in Dallas, building four high rises with about 12 Minnesota KAers and families sharing the journey. We still prize the Christmas bulb Loretta Kahlin painted for us.

Then after that we had four nice projects over three years in Sioux City, Iowa, where we had two superintendents and myself onsite. I would say I matured as a project manager being out of town where I was the face of KA dealing with the Owners, subcontracting community, unions and the field labor. KA poured the first post-tensioned structure in NW Iowa and exercised great quality control working with the local labor force to get it done right. Another highlight was, both of our sons, Dan and Ken were born there.

In the mid-80s Kraus-Anderson took on yet another huge project: Canterbury Downs. You were project manager for the grandstand. Talk about the challenge of that project.

What a blessing Canterbury Downs was for KA in 1984. The Twin Cities construction market was just coming out of an economic downturn and it was one of the largest and the most public construction projects in Minnesota. This was the start of the “Power of One” for KA as we had the KA Building team working on the track/site, KA St Paul team building the horse barns and KA Mpls team working on the Grandstand. We had over 500 carpenters and laborers working on a fast track schedule on our payrollto open in 363 days that was the talk of the town. Building the race track was both taxing and fun!

You then worked on a variety of projects including office buildings, student housing, data centers, retail buildings and hotels. What are some of the highlights?

CRAIG FRANCOIS: Each building, each site and each Owner has its own set of needs and it is our job to deliver to the best of our ability. I learned customer service from Jim Cargill of Dinnaken House. He wanted a clean site and we had the cleanest site in the Twin Cities, but I was still out there picking up cigarette butts. I realized he was right, a clean site instills a sense of pride and quality work.

You were at the helm of the work KA has managed at the airport beginning in 1991. What are some of the highlights of that work?

CRAIG FRANCOIS: There was 17 years of highlights beginning with the people at the MAC and airport community. Working around the traveling public we built many types of projects from concourses, terminal, parking ramps, roadways/bridges, baggage handling systems, the energy plant, complicated electrical systems, retail spaces, high security areas/systems and people moving trams all were challenging and fun to work on, but it still comes back to the people. Everyone at MSP has a common goal to provide great air travel services at a reasonable cost, which our KA staff embraced. Most memorable week at the airport has to be 9/11, it was a game changer and we knew it. 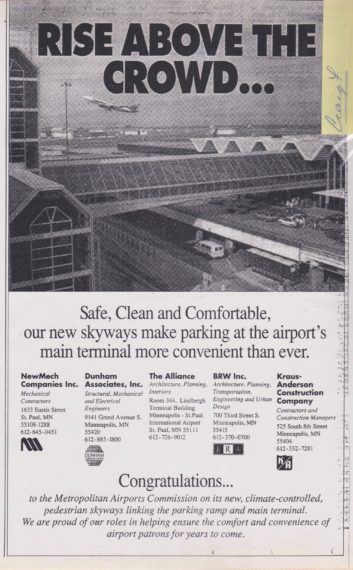 As you’ve moved into higher ranks, and as KA has grown, and then looked to consolidation of its resources, how have these changes influenced your perspective on the work?

CRAIG FRANCOIS: Kraus-Anderson has always had amazing people doing great work, but with the offices consolidating bring that talent together, our increased technical talent and utilization of technology we can service our customers so much better. As a DOO it is great to have these resources to support and deliver better projects for our clients.

You became director of operations of our Mpls office in 2008. Today you are co-director with Terry Hart of our Twin Cities office. What does a typical day look like for you?

CRAIG FRANCOIS: Many times Diane asks what I did today and I don’t know where to start. As an Operations leader we get to support all of our staff, the clients, designers, subcontractors, then sell new work, solve old opportunities, plus provide a vision for the company and track our progress. If we are lucky we get to eat a little lunch that day. You know what, I loved it and 98% is fun.

You have secured your legacy at KA in many ways—including by instilling a love for this work in your sons, Ken and Dan Francois! Talk about being part of a multi-gen KA family.

CRAIG FRANCOIS: KA has always been a multi-family member company from ownership to workers in the field. Because I like building both at work and at home, Dan and Ken certainly learned how to use a hammer and shovel at a young age. Their mother sent them along when the emergency call came in for nighttime job visits, so I guess they knew what they were getting into. Construction is a “getter done” and a people business and all KAers have to have that mindset.

Another influence you’ve brought to our headquarters is in our beekeeping project! Talk about how this effort came together. And how is it going? 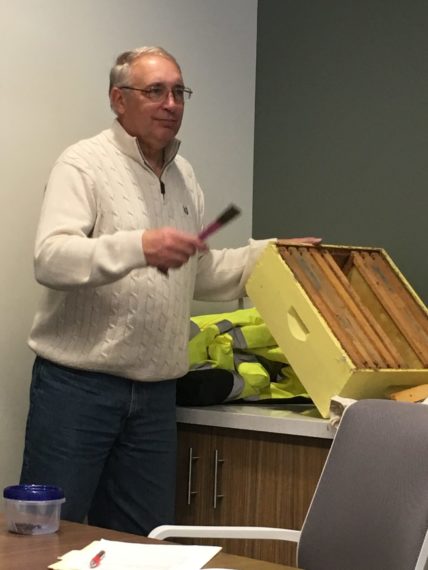 Above: Craig Francois demonstrates for the KA “Bee Squad.”

CRAIG FRANCOIS: Our rooftop bees are doing great and we should have some good tasting honey this fall. I think bees are a great example of what it takes to make a great construction company. Both communities have to battle the weather and the availability of opportunities and resources, but when everyone works hard for the common good, the projects get done.

What are you looking forward to in retirement?

CRAIG FRANCOIS: I will not be slowing down (but hopefully not rushing as much) by spending more time on the farm, with family and volunteering more. I am working at KA part time for a bit, too.

Any advice you’d like to impart for others looking to match your success in this industry?

CRAIG FRANCOIS: I have been fortunate to follow in the footsteps of all of the previous KAers that earned Kraus-Anderson’s reputation as a great builder, I worked to do my part while it was my turn. 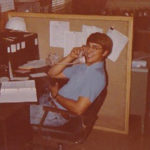