Chamberlain Apartments recently opened on Richfield’s east side, delivering the first modern multi-family apartments on this side of the city since 1971. With its blend of affordable and market-rate housing in an amenity-rich environment, Chamberlain is not only attracting strong interest from renters; it’s inspiring other communities to come in for a look. Along with project partners from Inland Development Partners, Urbanworks Architecture and Kraus-Anderson, Mayor Maria Regan Gonzalez cut the ribbon on the project Nov. 20, calling it “a great example of a team approach between the developers, the builders, the city and the Housing and Redevelopment Authority.”

Comprised of three new apartment buildings, three renovated buildings, extensive site amenities and landscaping including over 100 new trees, the complex provides a total of 316 residence units, with 20 % of the project designated as affordable housing. The first occupants moved into Building A at the end of August 2019; followed by Building B occupancy Nov. 1 and Building C on Dec. 1. Already as of mid-Nov., the development is 1/3 leased, exceeding expectations.  Here’s a look at some of the thoughtful details that are making this project a winner.

Chamberlain’s name is a reference to Wold-Chamberlain Field, the historic name of what is today known as MSP International Airport. How did that name inspire design choices? What choices were made to complement the project’s immediate surroundings?

URBANWORKS: Aeronautic themes were used to inspire the design throughout. For example, the roofs have broad overhangs and gable roofs at the entrances, meant to evoke the wings of an airplane. Lap siding was chosen to relate to the postwar residential single family homes in the area and broken up into vertical facades of color to reflect the scale of the houses marching down a street. To relate to the new retail nearby, stone was added to the facades to give it a more upscale feeling and lap siding was laid up in alternating exposures to subtly add more detail and visual interest. 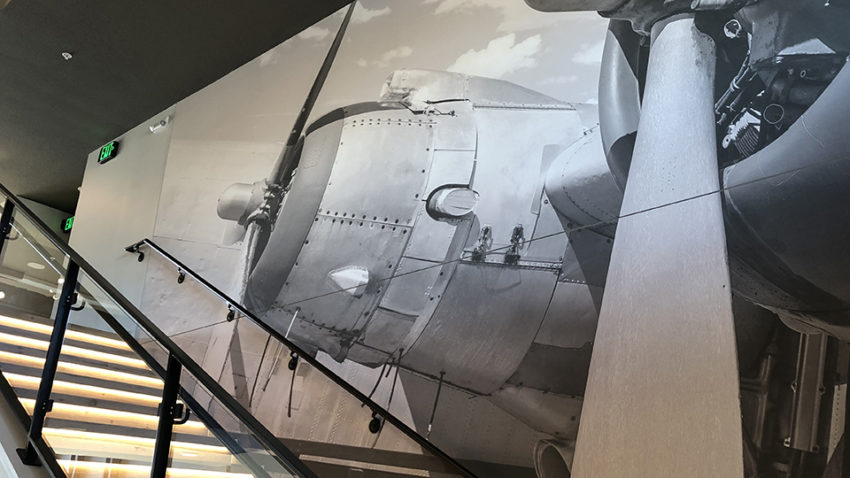 The aeronautic theme carries over to the interior design art selection including maps, luggage tags, even airport plans of different cities. Aeronautic travel inspired the branding theme of Chamberlain “Adventure Homes”- explore, travel, be open to new things, enlighten yourself. Rivets on the game room wall covering, airplane wing sconces, a mixture of industrial and polished materials all tie back to passenger planes of the 1920s, when the airport was called Wold-Chamberlain Field.

Talk about the goals for this project from the City’s perspective.

MELISSA POEHLMAN, AICP, ASSISTANT DIRECTOR OF COMMUNITY DEVELOPMENT, CITY OF RICHFIELD: The City began work to redevelop this area in 2002 in reaction to runway expansion at MSP, making this area unsuitable for the then-existing single family homes. The project addresses the noise/vibration that originally prompted redevelopment by providing a buffer to the older, single-family homes to the west, but it also addresses a number of goals and policies of our Comprehensive Plan and Cedar Corridor Master Plans:

The project allowed for (with the help of a Metropolitan Council Livable Communities Grant) construction of a two-block extension of Richfield Parkway and an improved section of the Nokomis-Minnesota River Regional Trail.

This was a joint venture between KA and Inland Development Partners. What did each party bring to this project?

ERICA ARNE, KA DEVELOPMENT: Inland Development Partners had been working on this project since 2015. They brought it to KA in 2017. That said, they really did a lot of the heavy lifting up front on the project, working with the City and neighborhood and getting the project entitled. KA Development’s role in the project began with securing the HUD financing and management of the design and construction process for the ownership group.

This represents KA Development’s first affordable housing effort. What were the goals? How were these achieved? What have we learned from this experience that may help us in future projects?

“All parties addressed issues openly as a group to find the best solutions with the most mutual benefits. In the end, it led to the best project possible.“

ERICA ARNE: The goal was to build new housing that was more attainable to a larger group of people, even at market rents. For example, our average rent on a one bedroom is under $1,500/month, which is significantly less than say a new building in downtown Minneapolis which may charge closer to $2,000/month. There are 64 units (20% of the project) designated as affordable to those earning 50% of the Area Median Income (AMI). For a single person, that is $35,000 and for a family of four that is $50,000. That’s important to understand that affordable is not just subsidized housing, it is workforce housing for those who are right out of college or someone in the service industry. In order to make this project pencil and include the affordable component, we received about $8.5 million in Tax Increment Financing to cover the gap. 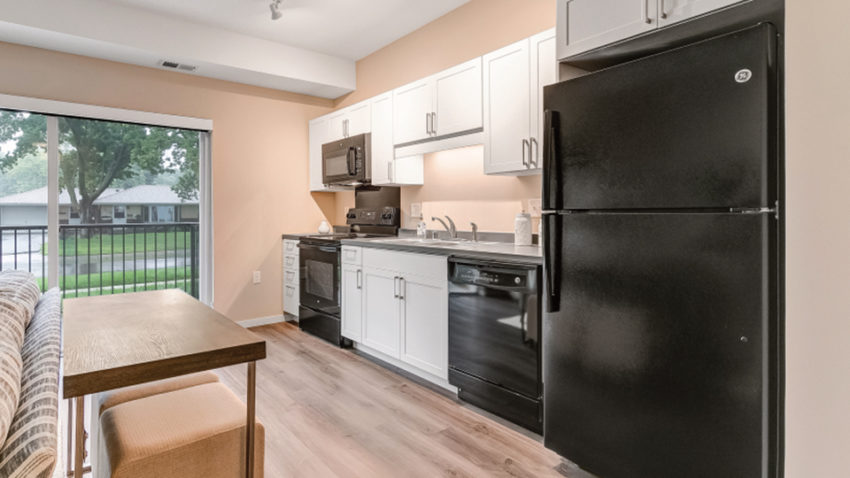 We also had to make decisions on pricing and scope, to ensure that we were spending money where we would get the most bang for our buck. For example, we chose laminate counters for unit kitchens and fiberglass tub/shower surrounds as these were acceptable in this sub-market. That allowed us to amp up the design and amenity offering to have 6,500 square feet of common amenities for residents. That has been a differentiator for us in this market.

How did budget and schedule shape the design and approach to this project?

CHRIS DOKKEN, KACC PROJECT MANAGER: At the beginning of the project and throughout construction, many design options were reviewed and vetted for cost to guide the final design. It should be noted that the ownership group made minimal changes to the new construction common area spaces, even though this could have provided substantial cost savings. By doing so, the owner maintained the integrity of the design, which is so evident as you walk through the common area spaces today. Weekly meetings were conducted to review progress, cost and work scope. This project was unusual in that the existing buildings included in the project required much more renovation than originally anticipated. A substantial part of the construction budget was diverted to cover costs for these rehabbed units.

In addition to its three new apartment buildings, Chamberlain includes a HUD-financed renovation of three vintage 1960s apartment buildings comprising 33 living units, which remained fully occupied as each unit was updated with new kitchen, bathroom, AC, upgraded electrical, sound-insulated windows and other infrastructure and cosmetic upgrades. What stands out for you about that effort?

ERICA ARNE, KA DEVELOPMENT DIRECTOR: KA Construction worked closely with Frerichs, the subcontractor that coordinated and installed the work; and with Saturday Properties, the property management company. Although renovation is always intrusive, in the end the tenants seemed very happy with the upgrades.

The common area features are outstanding. Talk about some of the highlights, like the unique ribbed ceiling. 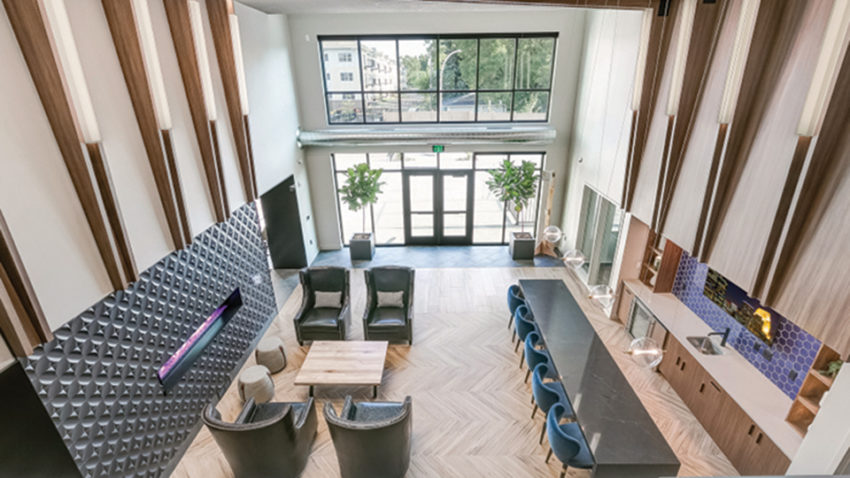 URBANWORKS: The two-story space allowed us an opportunity for a dynamic feature. The inspiration came from the structural ribs of vintage aircraft hangars. The integrated lighting is a decorative element as well as functional to illuminate the tall space.

The game room is a fun “surprise” amenity, with a hidden entrance, and posh features including a lighted bar countertop and leather-look walls. What’s your narrative on this room? 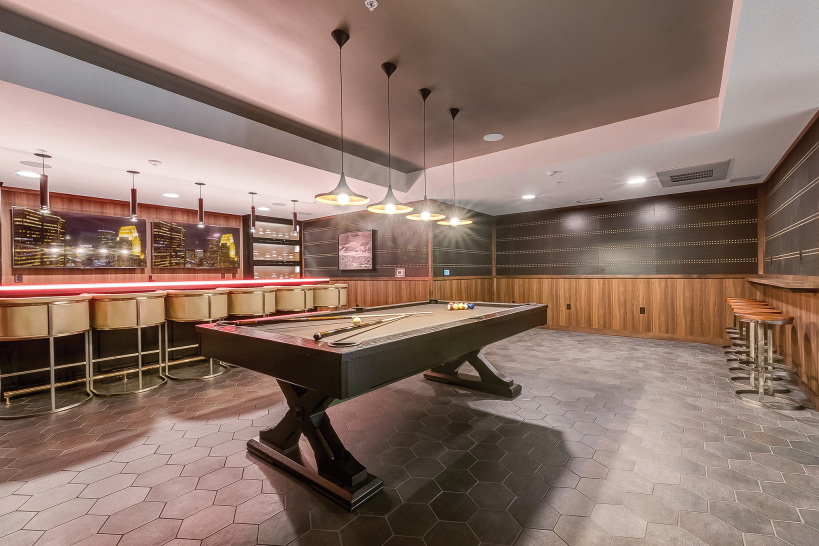 URBANWORKS: Interior corners of buildings always pose a programmatic challenge. The “speakeasy”concept ties back to the 1920s era of Chamberlain Field. Since there are no windows, it’s perfect for dramatic lighting effects, games and media viewing. It can be reserved for private parties or a place to gather with other sports fans to root for a favorite team.

Let’s talk about the units themselves. The alcove units are particularly popular. Comment about the approach to making these appealing?

URBANWORKS: Alcove units are always a cost-effective unit size. Integrating storage wherever possible makes it easier for residents to live in a smaller footprint. Creating different zones in the amenity areas to accommodate different groups helps extend the living space of those who rent smaller units.

The entire development is pet-friendly. How did this decision drive design and materials choices?

URBANWORKS: Durability and maintenance are always a consideration with multi-family properties, especially pet-friendly ones. Durable porcelain tiles that look like wood can be easily kept clean and don’t scratch. Darker corridor carpets conceal soiling and staining. Most of all, the pet wash located on the lower parking level helps tackle muddy paws before they track inside.