KA is filled with project managers, engineers, superintendents, and industry experts. It’s also filled with people who are dedicated to strengthening the communities they serve – and it shows. For over 20 years, KAers have spent a Saturday each year volunteering with Hearts & Hammers, a Twin Cities organization dedicated to providing exterior home improvement assistance for senior citizens, disabled adults, and veterans or their surviving spouse so they can continue living independently.

KA has been involved with Hearts & Hammers since its Twin Cities inception in 1997, when H&H founder Bob Walker wanted to expand the Texas-based organization to Minnesota. Bruce Engelsma and a few other KA employees served on the board of directors to get the Twin Cities chapter up and running. Since then, several KAers have stepped up in leadership roles across the organization, whether it be serving on committees or working as team captain on project day each year.

The program has seen exponential growth since then. In 2019, 65 KA employees, family members and friends gathered on a Saturday in June to makeover a former landscape designer’s 1923 home. The day was spent painting, patching holes, replacing the garage door, and weeding the owner’s garden – a task she loved to do but was no longer able to maintain.

How did you get involved with the Hearts & Hammers program?

ROSE MANTHE: In 1998, I moved from the KA Circle Pines office to Downtown Minneapolis to work directly with Bruce Engelsma. He was passionate about the Hearts & Hammers program and making it an annual company event. I was instrumental in designing the volunteer registration forms and site preparation processes, as well as gathering the volunteers to make “Program Day” a day to remember.

TERRY COLEMAN: I started out as the KA team captain in 2012. From there, I eventually moved to home coordinator and I now sit on the board of directors for Hearts & Hammers.

CHRIS KNUTSON: I became involved with Hearts & Hammers in 2012. As an intern at KA, I simply enlisted as a program day volunteer. I spent two years as a volunteer, and four years as a team captain.

CONNOR HART: I’ve volunteered with Hearts & Hammers over the past few years, since I started at Kraus-Anderson. This year, I stepped up to the role of team captain for KA, alongside Eric Kivisto.

What keeps you volunteering with Hearts & Hammers?

ROSE MANTHE: The people; KA employees, their families and friends; they make the true difference. I enjoy organizing the volunteers to make a difference to the homeowner and the impact the refurbished home brings to the neighborhood.

TERRY COLEMAN: Hearts and Hammers allows me to get my hands dirty and help people face-to-face.  So much volunteerism amounts to clicks on a computer or donation and fundraising work.  It is nice to be connected with the work and see first-hand how your time and resources improves someone’s life.

CONNOR HART: It’s an awesome way to give back to the community, and it’s really satisfying to see the transformation of the houses. It’s really great that KA is willing to do this every year, and you can see the overall impact we have had on the surrounding area in the time we have partnered with Hearts & Hammers.

What are some highlights from over the years?

TERRY COLEMAN: Two years ago we helped an older lady who was trying so hard to paint her house, but she could only get 4 feet high. In one day, KA transformed the drab house into a beautiful home that fit in nicely with the other houses in the neighborhood. Both the owner and the neighbors were very emotional. There is nothing better than seeing that immediate improvement in someone’s life. We come in the morning, and in the afternoon we leave behind a spot of beauty and relief for someone.

CHRIS KNUTSON: I enjoy meeting with the homeowners, understanding their story, implementing and executing the home improvements, and simply seeing their reaction and gratitude to the extensive home makeover.

ROSE MANTHE: Matchmaking in 1999; volunteer stepping in a paint can; the 1999 Victorian home of an 85 year old women who was raised in the home; the smiling faces of the volunteers and homeowners; the 2018 rains that turned a one day program into three. Chris Knutson taking down a tree too close to a home and pulling out the stump with his truck. The whole team cheered him on! 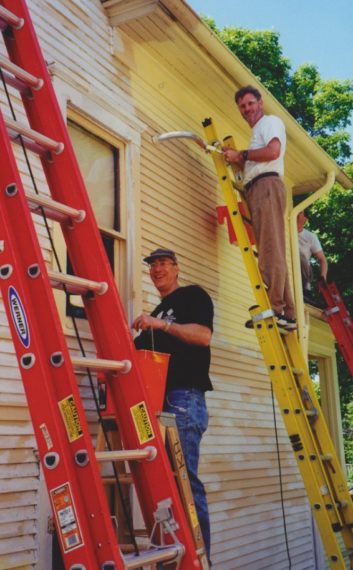 Above: Bruce Engelsma works on a Hearts & Hammers house.

Why do you think KA is so passionate about the Hearts & Hammers program?

TERRY COLEMAN: We get to help people. Each year, we meet a person that once could take care of their house. Often, they were involved with helping others. Through health problems or age, they have lost the ability to do as much as they once could. It feels good to help them regain their independence and pride.

ROSE MANTHE: The teaming together to make a difference in one day; after a smaller volunteer group does some serious prep work. The transformation of a home in one day is an amazing accomplishment and feeling of good will towards others… The thankfulness and amazement of the homeowner.

CHRIS KNUTSON: We get to go out and make an immediate difference in the community. It’s a fun and friendly event, and witnessing the impact we have on a family in need of assistance is the best part. The amount of KA employees, family, and friend volunteers that show up each year is a testament to how passionate KA is about strengthening the communities we serve.