“Pat recently completed work on the Delta Dental building project in Bemidji, MN. His on-site presence ensured the success of this project. He earns the respect of others by the dignity of doing his job well and is always a pleasure to work with. His relationships with the client, project team, subcontractors, inspectors, City officials, site neighbors, etc. are exemplary and consistently demonstrated our core values.” 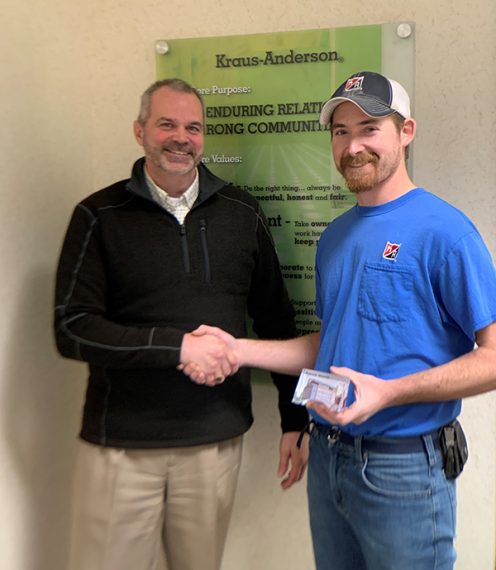 “When Pat calls for an inspection, we are confident that he has personally reviewed the items to be inspected and that we will not be used as a quality control. Pat’s communication is unmatched and he consistently works to foster a complimentary working relationship with our department” -Bryan Kerby, Bemidji building official.

“The team was skilled at finding ways to spend available funds effectively and to troubleshoot, solve problems that crop up, and recover/reallocate funds where appropriate. Pat excels at quickly assessing context and identifying potential issues and asking critical questions of the team at KA, subcontractors, and the Delta Dental team. The expertise of the KA team helped Delta Dental create the employee space we want without sacrificing aesthetic, deadlines, or spending outside our budget.” -Tamera K. Robinson, Sr. Vice President & Chief Financial Officer, Delta Dental of Minnesota

“He earns the respect of others by the dignity of doing his job well and is always a pleasure to work with.”

“Pat goes above and beyond at levels that are almost unbelievable. When I had a question or concern, whether I called, or text, or stepped into his job trailer, he never forgot to get back to me, or help me solve the issue. He knew the plans of Delta Dental like the back of his hand, including my finish schedules and details. I have to imagine that he knew all that stuff for most of the other trades as well. At times I almost felt silly or pesky for asking some questions, but Pat always kept his cool, and got me the answer I needed. His jobsite was borderline surgical, and in my experience was probably the smoothest run commercial job I’ve ever been a part of! I hope to work with him in the future.” -Zach Paulson, Flooring Foreman.

The KA Core Value Award is presented monthly to a KA employee. Nominated by their peers, business partners and clients, the recipient of the award is selected based on their representation and practice of KA Construction’s core values:

Integrity: Do the right thing… always be respectful, honest and fair

Teamwork: Collaborate to foster trust and success for all

Value People: Support each other is a safe, positive environment where people are recognized and appreciated for their contributions.