Pictured above: The Ry-Krisp plant in 1925, and the building today.

When Kraus-Anderson’s predecessor J.L. Robinson built an eighty-two by one hundred and ten foot bakery for the Ry-Krisp company in 1922, it is unlikely that he could have imagined that the national appetite for this long-lasting Swedish crisp bread would have kept the factory in this Southeast Minneapolis location open and producing for nearly a century.

From its opening until the plant’s closing in 2015, Ry-Krisp crackers were made exclusively in this plant and sold all over the world. First marketed nationally as a health food snack, Ry-Krisp became a national snack food staple. If you spent any time canoeing on the Boundary Waters or on long camping trips, you are probably familiar with the taste and texture of the cracker. Though the popularity of Ry-Krisp eventually declined, it has maintained a cult following beyond the closure of the factory that J.L. Robinson built.

Ry-Krisp was founded by Arvid and Erik Peterson, who immigrated to the United States from Sweden, and brought with them a recipe for traditional Swedish “crisp bread.” Crisp bread or knackerbrod was a staple of the 19th century Scandinavian diet. It was often made of rye, required no yeast, and had an incredible shelf life. In fact, this type of cracker was traditionally produced only twice a year, and were made with a hole in the center so that they could be efficiently stored on a single rod.

In 1904 the Peterson brothers opened a bakery on Lyndale Avenue. Over the next decade the growing Scandinavian population in Minneapolis provided an expanding market for the Peterson brothers’ crisp bread. In 1913 they sold the business to a group of local investors, who turned Ry-Krisp into a national brand. In 1922 they built the plant at 824-830 Sixth Ave. Southeast Minneapolis. It is a substantial plant with a rail siding, meant to produce crackers to be shipped all over the country.

Minneapolis was a natural place for a national food brand to emerge, since soon after the Civil War, the “mills that made Minneapolis” produced the very first national food brands in Pillsbury, General Mills, and their predecessors. Mars candy also started here when Frank Mars, a native of Glenwood, Minnesota, opened the Nougat House, and eventually started the Mar-O-Bar company, making candy bars in the North Loop and selling them all over the world. So from wholesome breads to popular sweets, the Ry-Krisp bakery was located in a hub of large scale packaged food manufacturing.

Ascending to the National Stage

The increased national demand that fueled Ry-Krisp’s growth was rooted in a craze around the turn of the century for packaged health food. Kellogg and other cereal brands also became household names and staples of the national breakfast table during this time. Industrial techniques applied to food production coinciding with advances in transportation and the emergence of national mass marketing turned these early regional food brands into national industrial giants. Ry-Krisp was a relatively small player in this trend, and it was eventually acquired by a much larger player, the Ralston Purina Company. This huge manufacturer and distributor, which was the child of an unlikely coupling of dog and health foods, purchased Ry-Krisp in 1926 after the owner of the company became obsessed with eating a whole grain diet after becoming connected with work of Albert Webster Edgerly (1852 – 1926) who published The Life Building Method of the Ralston Health Club. So, Ry-Krisp crackers went from a popular regional bakery serving the Scandinavian community of Minneapolis, to a player on the national stage.

With all of this growth, the original structure built by the founder of Kraus-Anderson was still best suited to making the crackers. It is remarkable that the production of the crackers was able to expand to meet national demand from the original bakery and continued to do so for decades. 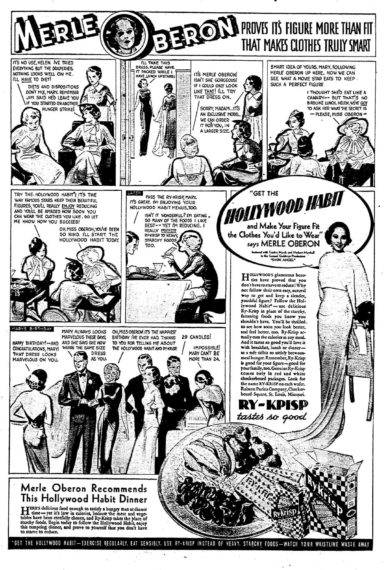 Ry-Krisp became a national brand during the era of print media, so the history of Ry-Krisp marketing can be explored today in all of its Art-Deco glory. Some well-known artists worked on Ry-Krisp ads, and some of them have striking quality today. Old advertisements, however, often come off as morally repugnant to contemporary viewers and Ry-Krisp is no exception.

In 2013 food giant Conagra bought the Ry-Krisp brand, and two years later they stopped making the cracker and shuttered the factory in Minneapolis. There is still lingering brand loyalty and strong interest in the product, including attempts to begin making Ry-Krisps again, with a potential relaunch in the upper Midwest and California markets where there is continued interest and a strong and vocal social media audience.

One thing is sure, the baking of the relaunched knackerbrod will not happen in the original home of the Ry-Krisp bakery as the new owners have pledged to move production to a new factory in Illinois. It seems like the building has outlasted even the long-lasting crackers that it used to produce. Charter schools have expressed interest in the space as have other bakeries. Are there other creative ideas for this solid Southeast Minneapolis structure? At this writing, the next chapter of the hearty cracker, and the factory that produced it, remain unwritten.