Long hailed as “The Icebox of the Nation” for its chilling temperatures, International Falls is so much more: Take a second look, and you’ll see a beautiful, historic and neighborly community; quiet, yet a crossroads to points around the globe. No one knows this more than longtime Mayor and civic booster Bob Anderson, who recently provided a virtual tour of this distinctive Minnesota community.

“The Icebox of the Nation” is no joke! Tell us about that title.

BOB ANDERSON, MAYOR: The city holds the copyright to the title of “Icebox of the Nation” today.  The title and cold weather attracted many advertisers such as Cream of Wheat and Diehard Batteries to shoot commercials.  The cold weather testing industry is alive and well every winter in the city.

International Falls has also been called “The City that Pulpwood Built” for its large paper mill that began producing paper in 1910.  The mill today is owned by Packaging Corporation of America, and produces fine white paper for your copier and printer, sold through OfficeMax/Office Depot and under the Boise X-9 label.

The third moniker of International Falls is “The City where the Streets are paved with Gold.” In 1894 gold was discovered on Rainy Lake and a gold rush ensued. Overnight a community was developed and became known as Rainy Lake City, which grew to several thousand residents. Mining continued for six years until it became unprofitable to remove the gold from the quartz rock.

About that same time International Falls was becoming settled, and as our main street was being constructed in what was muskeg or peat, someone got the idea of taking the gold mine tailings piled on the islands of nearby Rainy Lake for stabilizing. Forty barge loads of tailings flecked with gold were dumped into the streets for a base. “Ripley’s Believe It or Not” said that our streets were paved with gold!

Talk about being an international community.

BOB ANDERSON: We have two ports of entry.  The International Bridge serves as a pedestrian and vehicle gateway to Canada with the Town of Fort Frances, Ontario at the other side. Close to a million persons cross the border here each year.

The Falls International Airport and the U.S. Customs and Border Protection officers serve international flights as the other port.  International flights originating in Israel, France, Korea, Netherlands and most other European countries land and clear into the United States here.  Some movie stars and other dignitaries have found this quiet community airport to their liking.

A third port of entry is located in the City or Port of Ranier, located immediately adjacent to International Falls. The Canadian National Railroad (CN) trains enter the United States at this port on their way to Chicago or other large rail centers.  These trains originate from the Port of Vancouver and the Port of Prince Rupert in British Columbia, Canada.  Trains also depart through the Ranier port returning to British Columbia.

Talk about your ties to your Sister City in Canada.

BOB ANDERSON: International Falls, MN and Fort Frances, Ontario are linked by the International Bridge established in 1912.  Forest products manufacturing has been the economic base of the two municipalities.  The paper mill in Fort Frances closed in 2014; and efforts to reopen the facility continue today.

The Falls and the Fort work together on many fronts.  Falls citizens go curling in the Fort and Fort citizens come to the movie theater in the Falls.  Shoppers crossover to both communities. The City and the Town have mutual aid agreements for fire protection and ambulance service and a number of times each has come to the service of the other community.  There are many organizations that spend time together especially the Veterans of Foreign Wars, American Legion and Canadian Legion.  The Canada Day and July 4th parade color guards are made up of all three groups and on Memorial Day and Decoration Day the groups join together to honor their fallen comrades. 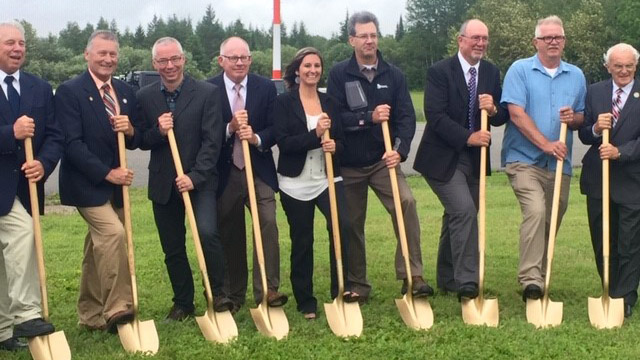 Besides streets paved with gold, what do you consider your community’s greatest assets?

What challenges is your community facing?

BOB ANDERSON: Paper has been challenged by electronic technology.  It was necessary for the paper mill to shutter some manufacturing operations to focus on best assets and continue to invest in them.  Replacing jobs lost in the layoff of 265 mill workers has been very difficult. The expansion of personnel at the ports of entry has been very helpful to the local economy.

Talk about the airport expansion project. How has KA as construction manager helped you reach these goals?

BOB ANDERSON: The previous terminal was designed for 30 passenger aircraft and pre- 9/11 security.  Today, with greater security and 50 passenger jets now serving the airport, a new secure area was needed with improved public areas for passengers. With the decision to replace the terminal, putting the funding and construction together and phasing to keep the airport in operation throughout, this became a 9-year project.  KA has individuals with outstanding experience at the lead in managing this project.  The entire community and those who return home to visit have raved about the comfort and ambience the new terminal offers.

You mentioned great healthcare facilities- how has KA helped you with those goals?

BOB ANDERSON: KA has developed a unique role and excellent experience in managing healthcare facility improvements.  The Rainy Lake Medical Center has a very modern look today because of the design and quality of the workmanship.  It is a place employees have pride to work in and welcome persons who need their care.

The city has worked with KA on numerous projects over something like 20 years. What does KA provide that has allowed this relationship to grow?

BOB ANDERSON: KA has brought a spark to the community in all the varied projects they have managed here in The Falls. The new Voyageurs National Park Headquarters Building, the re-build of the Super One Grocery, the Rainy Lake Medical Center Clinic and Hospital and the Falls International Airport Commercial Air Service and International Terminals have all been outstanding successes.  The word was out in the northland of the projects KA brought in on time and on budget.  The high level of communication that went with each project was also something that was always talked about.  Every one of these projects have helped to make the community a more desirable location.

You yourself could be considered a community asset, with your long record of civic service.  What drives that commitment?

BOB ANDERSON: It has been an honor to have served the city as a Councilor from 1968 – 82, 14 years; Mayor from 1982 -86 and a second stint as Mayor from 2013 – term ends in 2020…then maybe more? I love my city having been born and raised here.  Enjoy governance and helping others. It has also been an honor to have served as President of the League of Minnesota Cities (800 + member cities), chaired the Minnesota Chamber of Commerce Board of Directors (2000+ business members statewide) and presently serving as chair of the State of Minnesota Lessard-Sams Outdoor Heritage Council.

When you look back on your time serving this community, what are your takeaways? What advice would you share to future leaders?

BOB ANDERSON: My service to the city over the past 50 years has been a joy.  My hope is that I have helped to make the city better in some small way because of my gift of time and my relationships with many of the business and political leaders throughout the State of Minnesota.  My advice to whoever follows me is to be there for the city and its citizens, not yourself.  Your oath of office states to uphold the constitution, the laws of the state, the City Charter and ordinances.  Do that and you will have been successful.