Build Me Up: Celebrating Women in Construction with Carol and Sarah Sende

Women make up just under 10 percent of the construction industry workforce across trades, sales and management positions. Throughout the month of March, KA’s Build Me Up podcast will be profiling women who have been innovators, change makers and trailblazers in the industry.

We kick things off with Carol and Sarah Sende. Project superintendent Carol Sende has been with Kraus-Anderson for nearly 35 years and has  managed over 50 full-cycle projects, including over $50 million of housing projects. Carol’s daughter, Sarah Sende, is following in her footsteps. Sarah is currently working as a carpentry apprentice at KA, with aspirations to work her way up to be a superintendent.

We sat down with Carol and Sarah to talk about their careers, how they got into the industry, and what it’s like to be one of the only women on a jobsite. 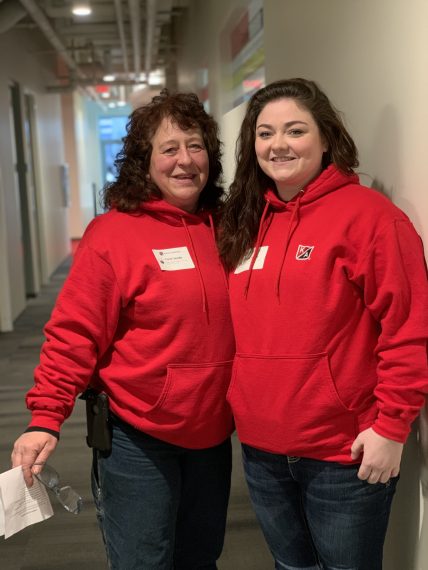 “It runs in our blood … My dad didn’t want me to because he knew how demanding it was, how the guys were on the jobs, and all that goes along with it … I think I tried to talk Sarah out of it for those same reasons, because it is tough sometimes.”

Carol Sende entered the industry in the 1980s, a time when it was just becoming acceptable to see women on the jobsite. Growing up on a farm, working with her hands felt like a natural fit for Carol. Her father worked in the industry for 38 years and heavily influenced her career choice.

Carol said her dad tried to dissuade her at first due to how challenging the role can be, but she persisted. When her youngest daughter, Sarah, approached her about entering the construction industry, Carol said she had reservations as well. But she couldn’t be more proud to continue her family legacy.

The Value of Mentorship

“I always knew if she could do it, I could do it … As long as you have a good attitude, everyone seems to be willing to teach you. I am appreciative of that.”

Carol credits a lot of her success to the mentors that took her under their wing early in her career. She said that she was nervous to make mistakes as a woman on the job, but they assured her that mistakes were a part of learning. Now, Carol tries to pay it forward by mentoring the next generation, including her daughter. Working hard and having a positive attitude are keys to success, no matter who you are.

“Just Do Your Job”

Carol has earned respect as a superintendent simply by doing her job, and doing it well. She learns something new every day that she comes to work, and she is grateful that the construction industry keeps her days exciting and different. A highlight in her career was her work on the Hennepin County Medical Center Hyperbaric Suites, a specialized treatment center using hyperbaric oxygen chambers. She has been behind the scenes of hospitals, factories, hotels, apartment buildings, and countless other projects. No day is the same, and that’s how she likes it.

As she drives through the Twin Cities, Carol can point to the over 50 buildings that she has had a hand in creating. It’s what her father pointed out to her, what she pointed out to Sarah, and what she hopes Sarah will have the chance to do one day, too.

Tune into Build Me Up for a more in-depth discussion on Carol and Sarah’s careers and perspectives as women in construction. You can subscribe wherever you listen to your podcasts.