The rise of the suburbs distorted the familiar geography that made Southtown a logical name for the neighborhoods along the Milwaukee Road. In the decade after WWII, Southtown was a nebulous description that pointed to the southern edge of Minneapolis, but the construction of the Interstate loop solidified the shifting place name. It now accurately describes, as it has for over sixty years now, the part of the Twin Cities south of 494, near its intersection with 35W.

In the mid-1950s Rudy Peterson and Carol Turner assembled a large parcel of land on Penn Avenue just south of the Interstate loop, and they were negotiating with Montgomery Ward to make them an anchor tenant of a new shopping center that would be called Wards Southtown Center. Peterson and Turner, incidentally, also assembled a large parcel of land in Blaine, north of the Interstate loop, which would eventually become the Northtown Mall, and would also open with Montgomery Ward as an anchor tenant.

From the earliest announcements of the Southtown project, Kraus-Anderson was mentioned as the general contractor, and in March of 1960 it was announced that the original developers of the project were stepping aside, and from that time forward Southtown was KA’s baby.

Lloyd Engelsma himself took over the role of project manager, and saw the project through disagreeable weather and no less than three labor strikes. In spite of all this, on a chilly day in early November, the parking lot was full of cars, and people were lined up outside to get first crack at Bloomington’s first regional shopping center. Since that day, Southtown has enjoyed remarkably consistent success. Opting not to enclose the center, as was once proposed, Kraus-Anderson has instead incrementally added amenities and improvements.

The first major addition came in 1963 when Kraus-Anderson added a bowling alley that they owned and operated for decades. More of bowling complex really. It is a 43,000 square-foot facility with 48 bowling lanes. KA sold the bowling complex in 1998. It is currently run by American Machine and Foundry (AMF), which operates a national chain of bowling alleys.

Today it is a novelty to see a movie theater that isn’t attached to a shopping mall, so it hard to imagine how much of a novelty the Mann Southtown was when it opened in 1964. As the first theater in the Twin Cities to be built next to a shopping center, it was in fact a standout; a midcentury modern movie palace with the star splendor of another age. The lobby was, for instance, decked out with a pair of fountains. It had a single auditorium that seated over a thousand and featured a gargantuan thirty five by seventy foot screen. A 1980s renovation took some of the splendor away in exchange for a second screen, and in 1995 the complex was closed and razed to make room for more retail.

Don Robey is an important part of the early history of Southtown. A band leader since he was a teenager, Don Robey was a consummate showman. In the 1940s his show “Tunes for Treasure” appeared on a Texas television network, making him a pioneer of television game shows. In Don Robey’s own words: “I started at Southtown a few months after they opened. That’s when I left the show world. I stayed at Southtown until May 1974… Southtown had a total budget of $72,000, but due to my friends in show business, from agency to name acts, we did very well… Most of the acts played in a heated tent. The stage was very large and decorated like the State Theater. It seated 1,500… This tent event was held in October each year during the teacher’s convention. It was Southtown’s anniversary each year.”

In 1984 another big tent was pitched to celebrate Southtown’s 25th anniversary. Rock and Roll Hall of Famer Rick Nelson was the headlining act. By this time renovations on the southern end of the complex provided some enclosed space between stores. This was originally designed as a retro-themed corridor called Old Town. As part of the 25th anniversary festivities, a party was given in Old Town for all of the original tenants. It is a testament to the success of Southtown that ten of the original tenants were still there to celebrate 25 years, including a mix of small local businesses and large anchor tenants. There was a remarkable amount of stability at Southtown through its first three decades. 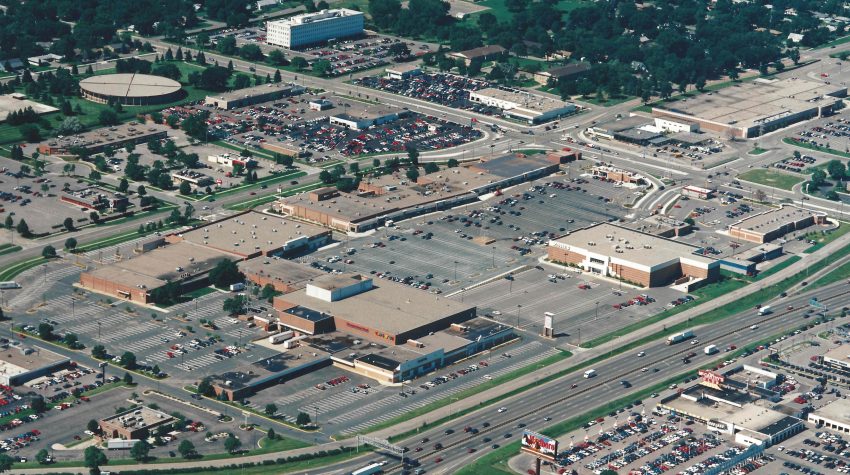 Compared with any large shopping center, there has been a remarkable amount of stability at Southtown though its entire sixty year history. Major changes came in 1998 when Montgomery Ward closed many of its stores, including the Southtown location. The vacuum was filled by a combination of Herberger’s and Toys ‘R Us, and in the last couple of decades other large retailers have moved in to anchor the center: Kohl’s occupies a standalone building on the north end of the complex. T.J. Maxx and Bed Bath and Beyond currently occupy Southtown’s southern arm.

When Southtown was constructed it was surrounded by cow pastures. Over the decades it has reconfigured and reinvented itself multiple times, responding to the burgeoning community around it, and to retail trends from department stores, mom and pop operations, big box retail, drive up convenience, service providers and digital/brick and mortar hybrids. Today it sits at the center of a vibrant ecosystem of retail, office, and housing; with a management team that is master planning its post-pandemic future. With the 2018 departure of Herberger’s opening up key opportunities, and with the Orange Line bringing bus mass transit to the center, you can be sure there’s much more in store for Southtown Center.